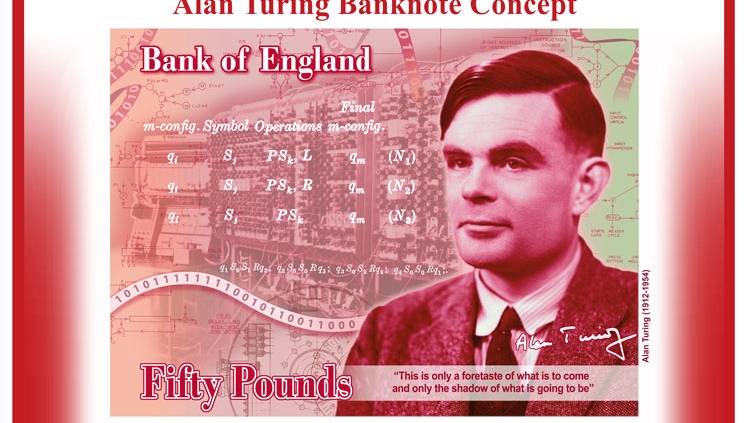 The new £50 note will feature an image of scientist Alan Turing, celebrated for his pioneering work with computers. The choice was made after the public sent in over 200,000 nominations, spanning almost 1,000 figures in the field of science, before a final decision was made by Mark Carney, governor at the Bank of England.

The note will be made from polymer — a recyclable material — and is expected to enter circulation by the end of 2021. For its 325th birthday, the bank has put on an exhibition with a display of 325 objects.

We talk to chief cashier at the Bank of England, Sarah John, about the history of the £50 note and how its design has changed over nearly 300 years.

“The 1725 note was part printed — the ‘promise to pay’ declaration that appears on all legal tender, the vignette (the portrait in the top left corner),the first digit of the denomination (5) and majority of the text were printed.

The other elements of the note were handwritten, including the date, issue number, cashier signature, and precise value — sums could be added by hand if necessary, resulting in a total monetary value that could be more or less than 50. Notes were used as a way of transferring money at the time, and not as everyday currency.

These banknotes were followed by notes with printed sum blocks — the rendering of the denomination in white writing on a black background — to deter alterations. A fully printed £50 banknote was first issued in 1855 and it was issued until the 1940s.”

“The Sir Christopher Wren design was part of the Series D banknotes, first printed in 1981. This was the first series of banknotes to feature famous historical characters and they were designed by British artist, Harry Eccleston.

The process for choosing the characters involved a design committee which was composed of the governor, senior bank officials and external advisers — including art historians. Those involved in the process would produce a list of candidates.

From this, a short list would be created along with preliminary and speculative design concepts. The final choice for each denomination was made by the bank’s governor at the time, Gordon Richardson.

The connecting theme for Series D notes can be defined as ‘British cultural heritage’. Similar to our current banknote selection process, the characters considered for the banknote needed to be deceased and should have made a lasting, significant and widely recognised contribution to the UK.

Design elements were also considered when discussing the suitability of candidates — there had to be a useable and generally recognisable portrait available.”

“The Series E banknotes, which featured Sir John Houblon on the £50, drew upon a more research-based approach to design than had been the case with earlier series.

The bank conducted research into how the public handle notes; colour was revealed as a major indicator of denomination, and so a decision was taken to maximise the difference in colour between the different denominations.

The designer, Roger Withington, used the reddish-brown hues of the earlier Series D notes — with Wren’s portraits — as the public had come to associate the £50 with that colour.

However, the red tones were intensified in order to create a greater differentiation, and thereby reduce any possible confusion, between this denomination and others in the series. Red is now inextricably linked to the £50 note.

1994 marked the 300th anniversary of the Bank of England. Houblon was the bank’s first governor, and Eddie George, who was the governor of the bank in 1994, decided that it would be fitting to mark this occasion on the new note.”

“Matthew Boulton and James Watt were leading figures of the industrial revolution. Boulton was an entrepreneur, while Watt was an engineer and scientist who made revolutionary changes to the efficiency of the steam engine. In 1775, they formed a partnership to develop and market steam engines, and the designs were taken up worldwide.

Boulton and Watt’s steam engines and their other innovations played an essential role in the UK’s Industrial Revolution. They were chosen for this note as a reminder of their invaluable and entrepreneurial contribution towards advancing society.

The physical size of the £50 note made it feasible to include a double portrait, and so Boulton and Watt were chosen to be depicted together on the Series F £50 note.

Each new note is also an opportunity to review and enhance its security and counterfeit resilience. In the case of the Bolton and Watt £50, a new security technology called ‘motion thread’ was used for the first time on Bank of England notes and was introduced as an additional security feature.

The motion thread on the £50 note is woven into the paper. It has five windows along its length, which contain images of the ‘£’ symbol and the number 50. When you tilt the note from side to side, the images move up and down. When you tilt the note up and down, the images move from side to side and the number 50 and the ‘£’ symbol switch.”

Then we ask the public to nominate people from the chosen field. This ensures we are considering as broad a range of potential candidates as possible and listening to who the public would like to see represented on their banknotes.

In 2015, we used this method for the first time. The late artist Joseph Mallord William (J. M. W.) Turner was chosen to appear on our £20 banknote, which we will issue in 2020. For the £50 banknote character, we received 227,299 nominations, covering 989 eligible scientists.

Turing provided the theoretical underpinnings for the modern computer. While best known for his work devising code-breaking machines during World War Two, Turing first played a pivotal role in the development of early computers at the National Physical Laboratory and later at the University of Manchester. He set the foundations for work on artificial intelligence by considering the question of whether machines could think.

His legacy is all around us today. Computers form an integral part of modern life, from the way we work, to how we communicate and how we shop. It is Turing’s incredible scientific achievements that are reflected in the design, and the reason he was chosen to appear on the £50 note.”